Ruben Schaken is a Dutch professional soccer player who now plays as a right winger for Inter Baku in Azerbaijan. In his early career Schaken was named the best player of the Dutch second division in the season 2007/08, when still a player of BV Veendam in The Netherlands. After BV Veendam and VVV-Venlo he signed by Feyenoord-Rotterdam. On 22 August 2012, Schaken was selected for the 2014 World Cup qualifiers for the Dutch squad. As international he came to six games for the Dutch national squad, 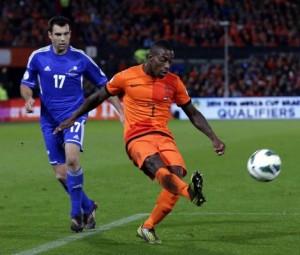 in which he scored two goals. Schaken’s goal against Estonia was the 1500th scored by an Dutch player at the senior international level.